Scenarios are used to interact with the network and performs specific configuration updates.

Every job has an underlying scenario that is defined by the operational web-tool that initiates it. The web-tool creates the job using task(s) referencing the scenarios defined here along with the parameters that the specified scenario uses. Common parameters are <node> and <verbose>, but basically any number and names are allowed, provided the job and the scenario(s) use the same set.

Scenarios can be concatenated to allow common operations to be reused. Therefore, it is good practice NOT to include an 'end' statement at the end of a scenario. Otherwise concatenating scenarios would not perform the desired actions, as the “end” statement terminates the scenario.

The scenarios and its functions are not case sensitive. Indentation is desirable but not mandatory.

Additionally, when editing a scenario, a contest sensitive help is permanently displayed to assist the user in selecting the commands and its various options. 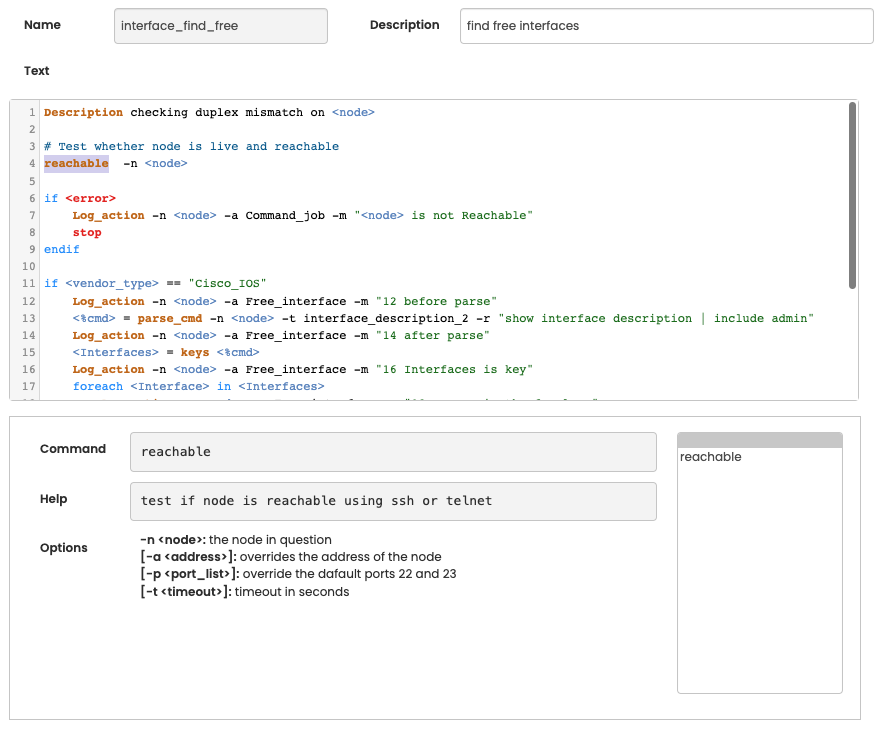 Scenarios can be used used in Templates, Scenarios and Stored jobs. To prevent deleting a Scenario that is in use in any of these applications, a dependency check is performed when attempting to delete a Scenario.

The results of the dependency check is a detailed report on which templates, scenarios and jobs include a reference to the Scenario and on which line number. The line with the reference is incorporated.

Depending on user permission level, the dependencies that prevent deletion can be overridden. If permitted, the dependencies report concluded with the message “Do you want to delete anyway?” and offers the choices 'Cancel' and 'Ok'.

The permissions are defined in the YCE.Auth_permissions table and can be changed using the 'delete_override' actions for 'relations', 'templates', 'template_revisions' and 'scenarios'. The default is that only 'Manager' and 'System' level users have the override permissions (Role_5 and Role_6 columns).